There are no good data on wages for ‘unskilled’ labour in China. We know that wages are low – too low. But we have little insight into how bad it is. One of the problems with measuring wages is their seasonal volatility. During peak seasons, a worker may perform many overtime hours and receive additional bonus payments. This boosts the take-home wage for some months but work-overload causes physical pain, psychological stress, increases health risks, and leads to a high frequency of work-related accidents.

Because wages are volatile, we need to look at changes over time and collect data points from many workers. We tried to do this for the textile and garment sector. We extracted information from about 300.000 social media posts that workers published in various discussion forums to inform each other about working conditions and pay. 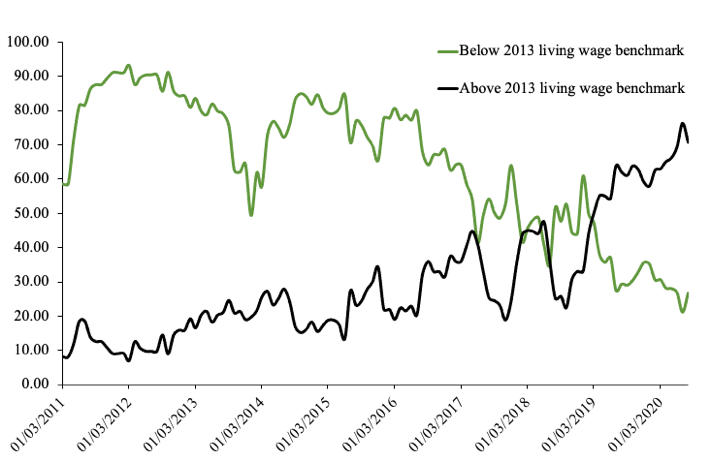 The picture above shows the share of workers reporting a take-home wage above and below RMB 3000, which was the living wage benchmark in 2013 (Asia Floor Wage). Note that a living wage is defined by a regular working week after deductions while a take-home wage includes overtime and bonus payments.

In 2013 less than 20% of workers indicate that they earned a take-home wage matching the benchmark. Almost a decade later, 20% of the workers still report wages below the 2013 benchmark. The data also suggest that wages are indeed sensitive to business cycles. The situation for Chinese textile and garment workers remains bad – really bad.